This blog is a collection of personal recipes, tricks, techniques and thoughts relating to a Portuguese perspective on food. Portuguese food is not well known internationally and part of me wants to keep it that way. This blog represents the other part which intends to reflect a culinary tradition which by being fragile and in some ways lacking in identity is still interesting in comparison to the over formalised cuisines of France, Italy and Spain.

Hanging cured hams must be one of the signs of a happy dwelling. Restaurants, bars and homes across Portugal, Spain and Italy feature hanging hams which can receive as much attention as a small Picasso on the wall! Presunto, jamon and prociutto are not so much a food stuff as a synthesis of methods, techniques and tastes particular to each region and community. 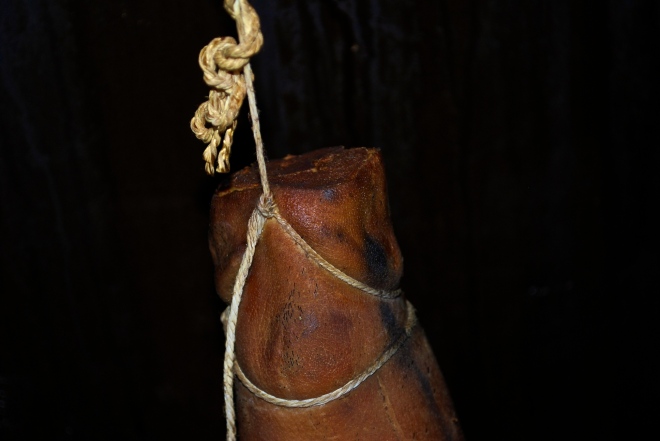 The Ham Project is an experiment in investigating the creation of taste cured ham, from pig raising to delicate slicing. This is not an exact science by any means and a lot of crucial parameters are, shall we say, prone to indeterminacy. How long was that smoker actually on for? Is it true the pigs ate scrapings from the chicken factory? Our initial experience in dealing with ham in a serious manner came in the shape of a paleta iberica bellota (Spanish acorn fed cured ham) which transformed a kitchen corner into an obligatory shrine for two weeks over Christmas last year. The joy of gently carving a few thin slices of rich tasting ham was shared by everyone. Next step was of course to experiment with our own curing.

After butchering half a pig with a focus on ham and chorizo making, a front and a back leg became our first experiments in brining and dry salting respectively. Two weeks of brining (water, salt, bay, coriander, black pepper) and three weeks in salt were followed by a few days in a smoker that to the uninitiated may look like a tea light and a sieve of wood shavings inside a locker from an old gym. After a couple of more weeks of hanging, the brined front leg tasted fresh and subtle if somewhat too moist, almost the colour of smoked salmon. After opening and further hanging it developed a slightly more mature taste and a deeper colour. As for the back leg, it went through a further treatment of white wine and paprika and is now hanging for 3 months.

Another couple of months and tasting commences! I look at it hanging in the kitchen everyday (now wrapped in a muslin cloth because someone thought it a good idea) and I’m happy that it is still to come!

Pedro is a composer, sound artist and performer. In 2002, he was awarded a PhD by the University of Edinburgh where he conducted research in both music and architecture. Pedro has recently led participatory projects involving communities in Belfast, favelas in Maré, Rio de Janeiro, travelling communities in Portugal and a slum town in Mozambique. This work has resulted in sound art exhibitions at venues such as the Metropolitan Arts Centre, Belfast, Centro Cultural Português Maputo, Espaço Ecco in Brasilia and Parque Lage and Museu da Maré in Rio, Museu Nacional Grão Vasco and MAC Nitéroi. His music has been presented in venues such as the Melbourne Recital Hall, National Concert Hall Dublin, Queen Elizabeth Hall, Ars Electronica, Casa da Música, and in events such as Weimarer Frühjahrstage fur zeitgenössische Musik, Wien Modern Festival, Cynetart and Música Viva. His work as a pianist and improvisor has been released by Creative Source Recordings and he has collaborated with musicians such as Chris Brown, Mark Applebaum, Carlos Zingaro, Evan Parker and Pauline Oliveros as well as artists such as Suzanne Lacy. His writings reflect his approach to design and creative practice in a wider understanding of contemporary culture and emerging technologies. Pedro has been Visiting Professor at Stanford University (2007), senior visiting professor at UFRJ, Brazil (2014) and Collaborating Researcher at INEM-md Universidade Nova, Lisboa (2016). He has been Music Chair for international conferences such as ICMC 2008, SMC 2009, ISMIR 2012 and has been invited keynote speaker at ANPPOM 2017, ISEA 2017, CCMMR 2016 and EMS 2013. At Queen's University Belfast, he has held posts as Director of Education, Director of Research and Head of School. In 2012 he was appointed Professor of Sonic Arts at Queen's and awarded the Northern Bank's "Building Tomorrow's Belfast" prize. He has recently been awarded two major grants from the Arts and Humanities Research Council including the interdisciplinary project “Sounding Conflict”, investigating relationships between sound, music and conflict situations. Ongoing research interests include immersive sound design and augmented listening experiences. Pedro has been appointed Director of the Sonic Arts Research Centre in 2021. View all posts by Pedro Rebelo

3 thoughts on “The Ham Project”